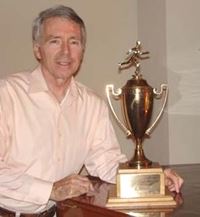 It was 12 noon at Queen Ann's Corner on July 4, 1959, starting point for the first annual Hingham "Marathon."

Our misnamed "marathon" was actually a 4-mile road race. None of us had raced competitively that far before. That day, the 4 miles would feel like 10.

Big or small, no race is without its adrenaline-fed nervous excitement at the starting line. The 12 of us runners had arrived early and exchanged friendly, sportsmanlike greetings, shaking hands all around. All being from Hingham, most of us knew one another. We had received our instructions from "Marathon Chairman" Frank Everton and were anxiously on the mark set to go.

Suddenly, we were off and running, not initially intimidated by the weather conditions. It was very hot and humid with crystal clear skies and little breeze. [For that day, South Weymouth NAS weather observatory reported an 84-degree high. It seemed hotter in Hingham.]
No one had conceded the race to me. Most had practiced for it. Several of the runners were from our Hingham High School (HHS) track team. I took off briskly, going out at about what I had expected to be a 5:10 pace, though the intense heat that day surely affected my sense of pace.

My plan that morning had been to press the field by going out with speed and then ease up, though that day, I ran hard the entire course and don't recall ever looking back. We enjoyed a lot of smiling town residents along the way, encouraging us on.

There were no water stations back then. A high-school-classmate, riding his bike along the route, gave me water twice. My 10-year-old kid brother, Ron, was on his bicycle and would be happily cheering for me around the final mile. My brother was a pal of another young bicycling spectator that day - then 10-year-old Tom Belyea, whose older brother, David, won the second race in 1960.

It was to be my most emotional run ever. I was leaving dear friends and a hometown like no other. I didn't know where life would take me. I only knew I wanted to run that day in good form, finish with my head up and gracefully say goodbye to Hingham before leaving for the Naval Academy at Annapolis the following day.

What was going through my mind that day as we 12 ran on America's longest Main Street?

We were running along streets in front of homes where I'd shoveled snow off driveways and sidewalks for $5 each during the winter - along streets I'd jogged so many times with leaves underfoot in the fall and snow and ice in the wintertime.
As the yards turned into miles and bystanders indicated I had a considerable lead, my thoughts wandered nostalgically to the experiences of the past two years - watching Hingham High's remarkable two-year undefeated football team and its terrific hockey team, playing basketball and running track. I recalled the school dances, taking Saturday night dates to Hugo's for mocha milk shakes and clam rolls, hair cuts at the Center Hingham barber shop and double dating in my folk's '52 Dodge at the drive-in theater – two joy-filled years projected through the cinema of my mind while we were striding relentlessly toward the High School.

We were quite an entourage for that era, with a pace-car convertible in front of me, and two police officers on motorcycles, with lights flashing, bringing up the rear.

Throughout the course, the pavement radiated sizzling heat. Early on the pace-car convertible escort was a bit too close with its exhaust. I kept trying to run laterally to avoid the noxious fumes. Finally, the convertible pulled ahead.

The right-angle turn on Main Street at Cold Corner signaled that the climactic end at Hingham High was not far off. I happened to cross the finish line first that sticky summer day to the shouts of an enthusiastic crowd of well-wishers. There, I was awarded a large bronze trophy on a mahogony base, engraved "Winner, 1st Annual Marathon, Hingham Mass. July 4, 1959." I later added my name, the 4-mile distance and 24:35 time at the bottom of the plate.

The winners were everyone who finished – and we all did – each mastering himself, the course and the scorching elements. In order of finish, we were: Max Ricketts (24:35), Lance Arnold (27:40), Ken Murray (28:16), Bob Smith, Gordon O'Reilly, Robert Carr, Norman Fairhurst, LeRoy Murphy, Peter Bliss, Tom Healey Jr., Brad Blaser, and Paul Dilger.

In his thoughtful and meticulously accurate 2006 historical perspective of the Hingham Road race, Tom Belyea wrote of those who run for "guts, glory or just for fun." Each of us was eagerly running that day for all three reasons.

I hope to return from San Diego to Hingham this year and traverse the course on July 4, 2008, the 50th time the road race will be run. This time, I won't be pressing the pace. I won't be running to win or even place in my age group. I won't be running for "guts or glory," though it should surely be "fun" to relive the joy of that unforgettable day so long gone by and yet still so vivid in my memory.

I'll be participating to say "thank you" to the finest hometown in America and the hospitable coaches, teachers, teammates, schoolmates, neighbors, and other townspeople who always made me so very welcome – and for those who have chronicled and continued the noble tradition of the Hingham Road Race, begun by the 12 of us who toed the starting line at noon on July 4, 1959. God bless you one and all and God bless America!

Max Ricketts was the senior class president of the Hingham High School Class of 1959 and undefeated in dual and tri-meet mile competions in 1958 and 1959 (setting a Hingham High School record of 4:35 for the mile run). He graduated in 1963 from the U.S. Naval Academy and served four years in the U.S. Navy and two years with the U.S. State Department. He is married to Edith Naldo Ricketts. They live in San Diego, California where they own and operate Naldo-Ricketts Reatly.
COVID-19
Updates & Alerts
Notify Me
Notification Sign-Up
Agendas & Minutes
Find recent documents
Online Bill Pay
MAKE A Payment
Contact Us
How can we Help?